This is not a review. Not yet. 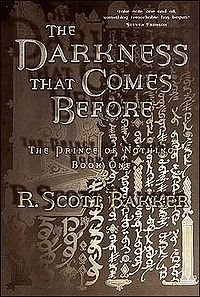 Given a hint of an excuse, I’ll talk your ear off about Canadian fantasy author R. Scott Bakker. He has four novels out, with a fifth expected later this month.

His first three are a fantasy trilogy, The Prince of Nothing, comprising The Darkness that Comes Before, The Warrior Prophet, and The Thousandfold Thought.

These books thrill me and terrify me. I find Bakker’s language in them to be a delight, his characters at once exciting and realistic (his Cnaiur urs Skiotha is the most fascinating implementation of the Conan-the-Barbarian archetype I’ve ever seen), and his insights into how humans operate utterly staggering. More than once I’ve described this trilogy as Lord of the Rings as written by Frank Herbert.

While these three books aren’t true genre horror, they have some terrifying, disturbing elements in them. They also have human tragedies of unutterable cruelty. Indeed, it’s these human tragedies that give me pause when I get the urge to re-read the trilogy.

The next book in this series, The Judging Eye, is due out on the 20th. I fully expect that I will, though with great trepidation, buy it when it comes out. 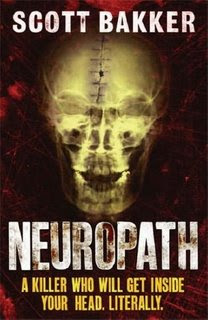 It’s with equally great trepidation that, yesterday, I began his fourth novel, Neuropath. I’m at page 93 of 300.

The book isn’t part of Bakker’s fantasy setting. It’s set in modern-day New York, with some mostly-unnecessary near-future touches. It’s a to-catch-a-psychopath story, in the mold of Thomas Harris or Michael Connelly, especially the latter. And, unlike with The Prince of Nothing, overt horror seems to be one of Bakker’s premises, rather than merely one of his tools.

Let me back up a little here. The sorts of movies that really scare me are the ones that show something truly gruesome and awful early on, to establish just how far out their limits are. That way, whenever they subsequently threaten to show us something disturbing, we believe they’ll actually carry through with their threat. Rob Zombie’s The Devil’s Rejects comes to mind.

The Prince of Nothing established, for me, Bakker’s lack of limits. Neuropath is one long threat to exercise that lack, especially given the overt change of genre. I’m finding that this is harming the reading experience for me. Rather than relaxing into his wonderful, musical prose (less musical here than in his fantasy, granted), I find myself building defenses against it. I brace against each sentence, knowing it stands a reasonable chance of conveying what’s about to become the worst image I’ve ever imagined, whatever that may be. I feel like I’m rushing through a museum, doing my best to get from one end to the other without really seeing any of the exhibits. It makes the reading experience adversarial – me trying to fend off the author, rather than letting him in.

There are reading experiences that are supposed to be adversarial, that are meant as a struggle between the reader and the author. Mystery is a prime example – the author strives to fool you, and you strive to outwit the author. But the struggle of a mystery aids the immersion – you dive in, scooping up every detail you can find, so that you don’t miss anything. Here, the struggle breaks the immersion by forcing me to brace myself against the blow of each detail.

This adversarial experience is even usually one of the pleasures of reading horror. The evil, the monster, the dragon, already more terrible in horror (and thus more satisfying in its defeat, if it has one), presents the hero with a challenge, but also presents me with a challenge – the challenge of braving the next page. Again, normally this is one of the pleasures of reading horror, but Bakker plays rough, and without padding. Rather than letting the disturbing imagery wash over me, letting me vicariously immerse myself in the struggle with the darkness, I find myself shying away from it. It’s hard to properly enjoy a book when your mind holds it at arm’s length.